Like many of us, I dove right in last week with the release of the 1940 Census, and was excited to quickly find all four of my grandparents: two in Chicago, one in East Chicago, Indiana, and one in Kalamazoo, Michigan. In my family narrative, the 1940 census offers a glimpse into the dynamics of each of my grandparents’ lives, at an important threshold right before their marriages and the outbreak of World War II. Indeed, by the next census in 1950, each set of grandparents will have families of their own, extending the family tree to the next generation.

When I give programs on various genealogy subjects, I almost always use examples of Stanley Piotrowski, my great-grandfather. Not only did he lead an interesting life, but his genealogical paper trail is fascinating and provides a number of fantastic and instructional examples; comparing the Piotrowski’s of 1930 with the family of 1940 is one of those.

In 1930, Stanley and his wife lived on North Street in Kalamazoo, Michigan with their two children, Stella and Francis. Having moved to the city sometime in 1920 or 1921, Stanley worked as a baker and grocer and also became a leading member of the local lodge of the Polish National Alliance. Here is the family in the 1930 Census:

Several things jump out with this example, but the most obvious is Stanley’s wife’s name. What is it? Why is it not listed? Her birth name is Wladyslawa (which may explain the enumerator’s reluctance to include it), but the Americanized name was Winifred, a much less challenging exercise. Had I been searching for just Winifred, I would not have had much luck, to say the least. This example illustrates that despite all the technological advances made in family history over the years, the records will only ever be as good as the information found in them. The real puzzler about this 1930 census page is that all of the other family data is accurate, including date of immigration and birthplace, but for whatever reason, the enumerator did not include Winifred’s name. Is there a story there? Did a neighbor provide the information? Perhaps one of the children? Did Stanley or Winifred, but then forget to give her name? Why is the name not listed? I will likely never know.

Moving forward to 1940, we find that not much has changed for the Piotrowski’s. They all still live at the same address on North Street in Kalamazoo, although Winifred is now identified by name; a pleasant change from the 1930 record! One clue not found, however, is the “x” next to the name showing which family member provided the information to the enumerator. That important mark can give the researcher an idea about the accuracy (or inaccuracy) of the information. Given Winifred’s name gap in the 1930 census, I’m not entirely surprised there is no designated “x” with the 1940 record.

This is the last census where the Piotrowski family appears together. Francis was killed during World War II, and Stella married in 1943 and started her own family shortly thereafter. Indeed, given the seismic worldwide impact of the coming Second World War, the 1940 Census offers a singular glimpse into thousands of families across the United States, the Piotrowski family included. Although the surviving family members remained in the Kalamazoo area for decades, that Piotrowski line was never all together again on a census page. All of us have similar family stories or tragedies, which makes our 1940 finds all the more compelling.

I grew up in Kalamazoo, Michigan, and over my 20+ years living there, I drove past Harrison Park thousands of times. Located on the northeast edge of town, the small triangular-shaped park is in what was the city’s Polish neighborhood. Growing up, I remember my Dad pointing out several buildings in the neighborhood that tied back to the family.

A few years ago, my Dad mentioned that there was a monument at Harrison Park, dedicated to the fallen men of World War II, Korea, and Vietnam that were from that neighborhood. With two ancestors that were killed during World War II, my curiosity was piqued.

My next visit to Kalamazoo included a stop at Harrison Park, and sure enough, there was the monument. Among the men listed were Francis Piotrowski (1918-1944) and George Topoll (1918-1943), my ancestors. 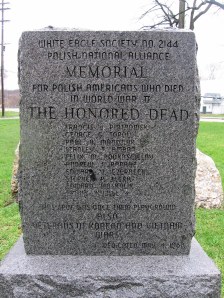 Discovering the monument was certainly important, but the big find was the lodge number and name of the Polish National Alliance (#2144, White Eagle Society), the fraternal group that dedicated the monument as a memorial to those Polish men who had died during the war. Francis’ father – Stanley, my great-grandfather – was very active with the PNA, and I now had identified the lodge he’d been active with.

I’d driven past Harrison Park thousands of times over the years, but had never noticed the monument, its historical significance, nor its important genealogical value. I had been so focused on the names and dates on my family tree, learning as much and as quickly as possible, I had failed to take a step back and explore the historical context of my ancestors’ lives – the neighborhood they called home, the parks they played in, and the national events that shaped their lives. I had nearly missed a vital piece of my family’s story in the old neighborhood. A lesson learned!