As my first ancestor to settle in Chicago, Sophus Soren Hansen, my g-g-grandfather, has always been of particular interest to me. Despite his arrival in the Windy City in the 1880’s, Sophus’ early years there always puzzled me. With a common surname, differentiating him from any other similarly named Hansen was difficult, to say the least.

Sophus Hansen married Rose Grobner in November 1895 in Chicago, and the couple had 3 children over the next dozen years. Yet one additional child, Josias, was born much earlier in 1888. Given how young Rose would have been then, and how long Sophus had already lived in Chicago, I suspected an earlier marriage, yet was unable to definitively link him to someone other than Rose.

In my research, one marriage record in particular grabbed my attention, where a Sophus S. Hansen married an Ursula Grass in Chicago in 30 April 1887. The date is consistent with Sophus’ arrival in the United States and also works with Josias’ birth date the following year. Here is the marriage record: 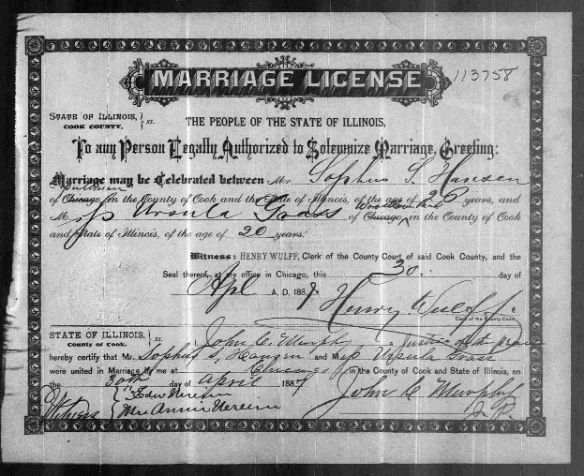 A good candidate, to be sure, but I was still not certain that this was my Sophus. Things became more clear, however, after my recent visit to the Cook County Recorder of Deeds office. After looking through the Tract Books for the family’s longtime property at 7042 Kimbark, Sophus’ name appears on both a mortgage and warranty deed, dated in the summer of 1887. After studying the books themselves, I found this reference: “This indenture made this twenty eighth day of July in the year of our Lord one thousand eight hundred and eighty seven between Sophus S. Hansen and Ursula Hansen his wife….”. The deeds reference Sophus’ acquisition of the property on Kimbark that was ultimately held by the family for decades, well into the 1950’s. By naming Ursula, this deed is the first document I found that links Sophus Hansen with his first wife.

As luck would have it, I returned home from my research trip to find Josias Hansen’s SS-5 Social Security application waiting for me. I had requested it a few months back, hoping it would arrive before my trip, but also validate my suspicion that Josias was indeed the son of Sophus and Ursula Grass Hansen. Here is a snipped copy:

As you can see, Josias’ mother is clearly Ursula Grass, as I suspected. Also note the address on Kimbark. Success! The Cook County marriage I had discovered earlier is indeed the correct record of marriage.

With this important find, Sophus’ early years in Chicago are now more in focus. After arriving in the city in the early 1880’s, he lived in an apartment building at 6904 Cregier for a few years. Sophus married Ursula Grass in April 1887, and Josias Hansen was born in November 1888. Around this time, the couple also acquired property at 7042 Kimbark. Ursula died in 1895 and is buried in Oakwoods Cemetery in Chicago in the Grass family plot, Section J1, Lot 533. Sophus remarried a few years later, and began a new family, remaining at the Kimbark address until his death in 1945.

3 thoughts on “A Hansen Mystery Resolved”