In my research, I came across an impressive collection of family photographs. Certainly a big find, and equally important, it offered me a new project! Many of the photographs were not labeled or identified, so as I scanned the collection, it was important to label everything as best I could, leaving many of the photos with a simple and unfortunate title – “Unknown.” In the field of family history research, is there a more frustrating word?

Once I finished scanning, I was excited to have crossed a project off my to-do list and anxious to start something new, so I never went back and really studied my “Unknown” images. So, I’ve started a new project and made it a point to go back and revisit those photos, and rename or relabel those individuals I can accordingly. There is never enough time in one night to go through the entire set, so I make an effort to do a reasonable number per night, perhaps 5 or 10 images. It will take me a while to go through the collection, but if I identify even a few ancestors in the photographs, it will have been worth it.

One of my ancestral re-discoveries is this gem of Sophus and Rose Hansen. 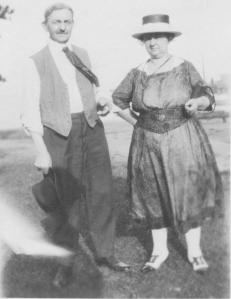 Readers of this blog might remember the Hansen’s from the “Looks As If We Had a Fight Here” post. When I had first scanned this image, outside of the date, there were no identifying marks, so I was unable to determine who the couple was. Indeed, this was one of the first images I had worked with, so although not named in this particular image, they certainly were in different photographs far deeper into the pile. Only by going back and carefully reviewing those images, both the known and unknown, was I able to identify Sophus and Rose and extract them from my pile of Unknown’s.

I’ve been pleased with how many photographs I’ve now been able to identify at least one ancestor in the image. Clearly, something I should have done right away. A lesson learned!